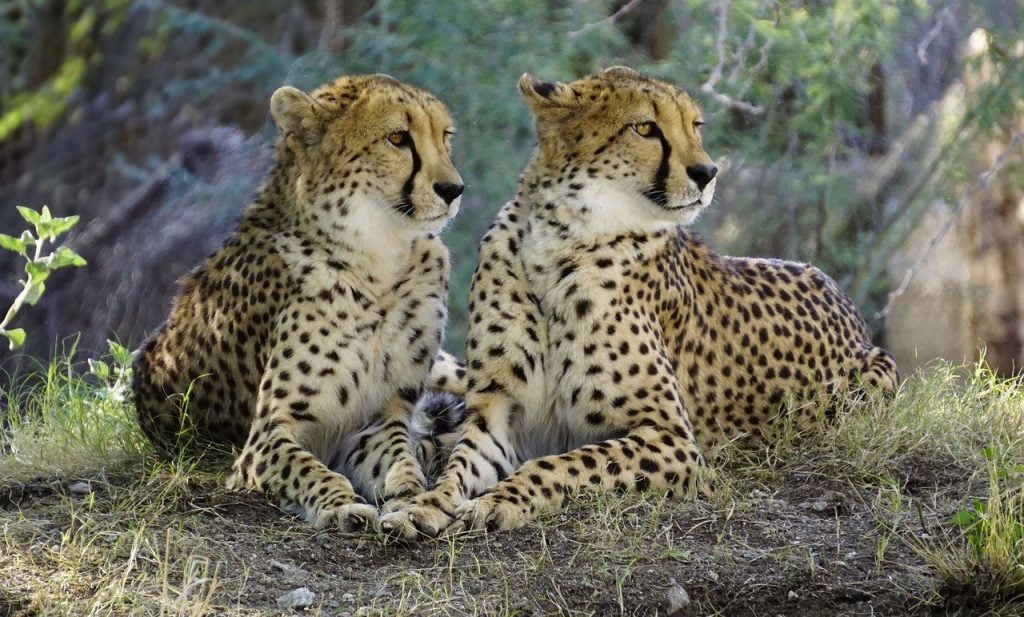 The springbok is a medium-sized antelope found mainly in southern and southwestern Africa. It’s one of the fastest land animal in the world with a maximum speed of 88 km/h. A slender, long-legged antelope, the springbok reaches 28 to 34 inches at the shoulder and weighs between 27 and 42 kilograms. It has 14 to 20 inch long horns that curve backwards.

Springbok can live without drinking water for years, fulfilling its needs by eating succulent vegetation. Breeding occurs year-round, and peaks during the rainy season, when forage is most abundant.

The pronghorn is a species of artiodactyl mammal indigenous to interior western and central North America. Known in North America as the American antelope, colic deer, pronghorn antelope, prairie antelope, or simply antelope. Because it is similar to the true antelope of the Old World. In summer, pronghorns graze on grass, cactus and thorns. And in winter, they feed on sagebrush and other plants available. Pronghorn is the fastest land animal in the world with a maximum speed of 98 km/h. A sailfish is a fish of the genus Istiophorus of billfish living in the cold regions of all Earth’s oceans. With a speed of 109 km/h, it holds the record for the fastest speed of any marine animal on Earth. They are predominantly blue to brown in color and have a distinctive dorsal fin known as a sail, which often spans the entire length of the back. Generally, sailfish eat small fish and squid. Some of the different types of prey they target include anchovies, herring, mackerel, and more.

The grey-headed albatross, also known as the grey-headed mollymawk, is a large seabird of the albatross family. It has a circumpolar distribution, nesting on isolated islands in the Southern Ocean and feeding at higher latitudes, further south than any other mollymawks. They feed mainly on squid, some also take fish, crustacea, carrion, cephalopods and lampreys. Its name is derived from its ash-grey head, throat and upper neck. Grey-headed albatross is one of the fastest flying animals in the world, its maximum speed is 127 km/h. Cheetah is a large cat native to Africa and central Iran. It is the fastest land animal in the world, estimated to be capable of running at speeds of 80 to 128 km/h, with the fastest recorded speed being 98 km/h. It usually reaches 67–94 cm at the shoulder, and the head-and-body length is between 1.1 and 1.5 m. Adults weigh between 21 and 72 kg.

The cheetah is a predatory animal and its prey includes: gazelles, impalas and other small to medium-sized antelope, rabbits, birds and rodents. The cheetah also hunts the calves of large herd animals. They generally prefer to hunt wild species and avoid hunting domestic animals.

The 10 Biggest Animals In The World

The Spur-winged goose is a large bird in the Anatidae family, related to geese and shelducks, but differing from the two in several structural features. It occurs in wetlands throughout sub-Saharan Africa. This species is often found in open grasslands along lakes, seasonal pools, rivers, swamps and river deltas. Spur-winged goose diet consists mainly of plant matter such as plant parts and seeds. It’s one of the top 10 fastest flying animals in the world with a maximum speed of 142 km/h. Frigate birds are a family of seabirds called Fregatidae that are found in all tropical and subtropical oceans. Their five extant species are classified in a single genus, Fregata. All species have predominantly black plumage, long, deeply forked tails and long hooked bills. Females have white underbellies and males have a distinctive red sycamore sac, which they inflate to attract females during the breeding season. Their wingspans are long and pointed and can reach up to 2.3 meter (7.5 feet) across.

Frigate birds spend most of the day in flight hunting for food, and roam around trees or rocks at night. Their main prey is fish and squid, which are caught when chased across the surface of the water by larger predators such as tuna. Frigate birds are one of the top 10 fastest animals in the world with a maximum speed of 153 km/h. Mexican free-tailed bat or Brazilian free-tailed bat is a medium-sized bat native to the Americas, considered one of the most abundant mammals in North America. Free-tailed bats mainly eat moths and other insects. It has been claimed to have the fastest horizontal speed (as opposed to diving speed) of any animal. It’s ground speed is over 101 mph (162 km/h), its actual air speed has not been measured. Mexican free-tailed bats are typically 9 cm (3.5 in) in length and weigh about 7–12 gram.

The golden eagle is one of the most famous birds of prey in the Northern Hemisphere. It is the most widely distributed species of eagle. These birds are dark brown in color with light golden-brown feathers on the neck. Golden Eagles ranks second in the 10 fastest animals in the world with a maximum speed of 320 km/h.

Golden eagles use their agility and speed with powerful legs and huge, pointy claws to snatch a variety of prey, mainly hares, rabbits, and marmots and other ground squirrels. They build large nests in rocks and other high places, where they can return for several breeding years. Most breeding activity occurs in the spring, they are monogamous and may coexist for many years or possibly for life.

The 7 Most Expensive Bikes In The World 2021 The peregrine falcon, also known as the peregrine, is a widespread bird of prey in the Falconidae family. Peregrine is world famous for its speed. The speed of over 389 km/h makes it the fastest bird in the world and the fastest member of the animal kingdom. According to the National Geographic TV program, the highest measured speed of a peregrine falcon is 389 km/h. Typical prey items of peregrine include shorebirds, ducks, grebes, gulls, pigeons, songbirds, and also eat bats. Peregrine females are much larger than peregrine males.