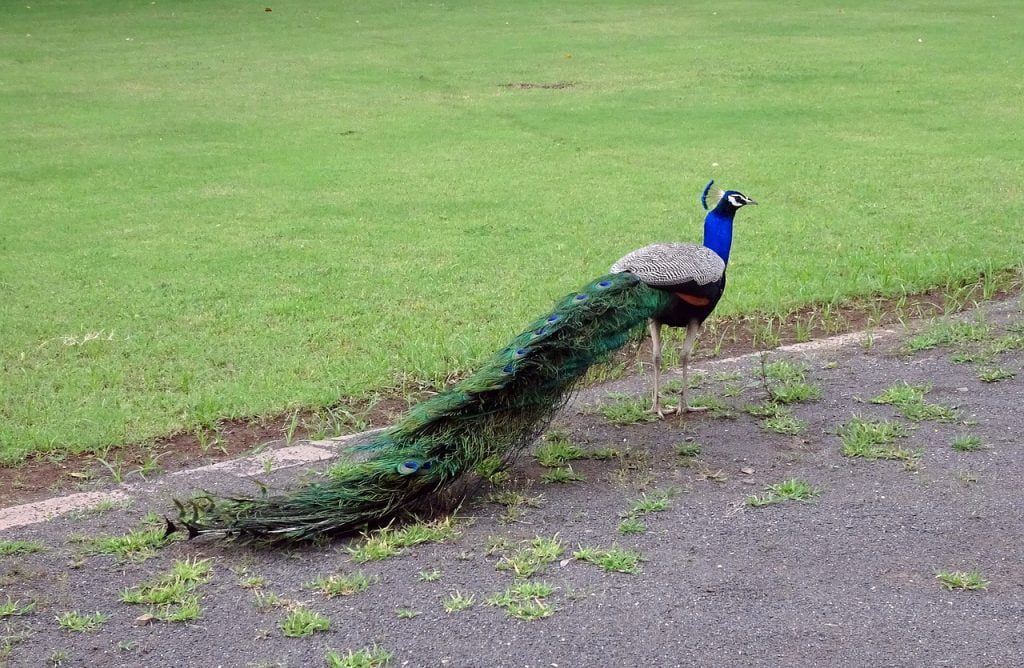 Most Beautiful Birds In The World

Do you know what is the most beautiful & colourful bird in the world? Everyone loves colours and colours have an important role in our lives. So it’s no surprise that we love watching colorful birds too. We all react differently to different colors. Here we have listed the top 10 Most Beautiful Birds in the world. Let’s see!

The Resplendent quetzal is a bird of the quetzal trogon family. Which is found from Chiapas, Mexico to western Panama. Resplendent quetzal is famous worldwide for its colorful feathers. It is the national bird of Guatemala, and its image is found on the country’s flag and coat of arms. This species grows from 36 to 40 cm tall. The resplendent quetzal is primarily a fruit-eating bird. However, they also add insects, frogs and lizards to their diet. They are one of the most beautiful & colourful birds in the world. 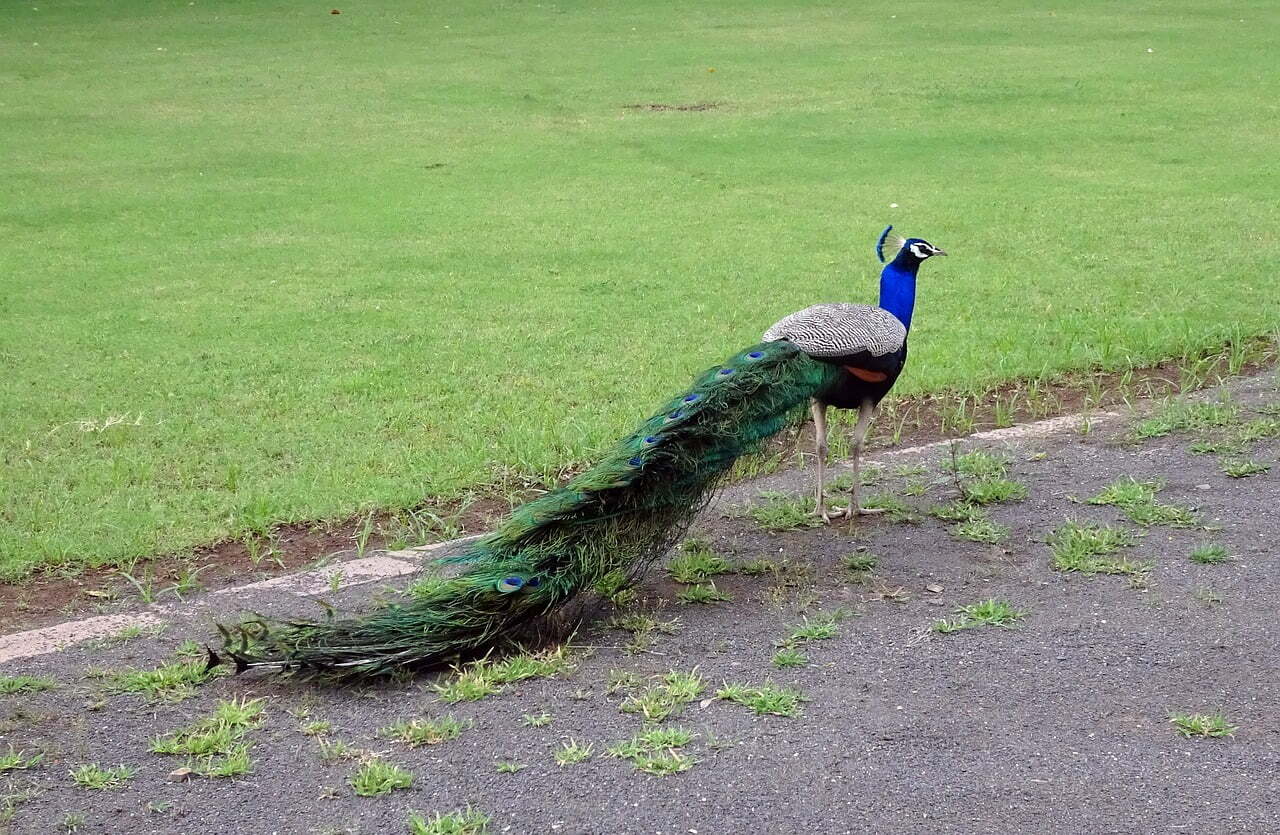 The Indian peafowl (blue peafowl) is a species of peacock native to the Indian subcontinent that has been introduced to several other countries. Additionally, it is brightly colored, with fan-like feathers predominantly blue. Indian peafowls are large birds with a maximum length of 195 to 225 cm from bill to tail. They are omnivores and feed on seeds, insects, fruits, small mammals, reptiles and small snakes. The Indian peafowls are one of the most beautiful and most colourful birds in the world. 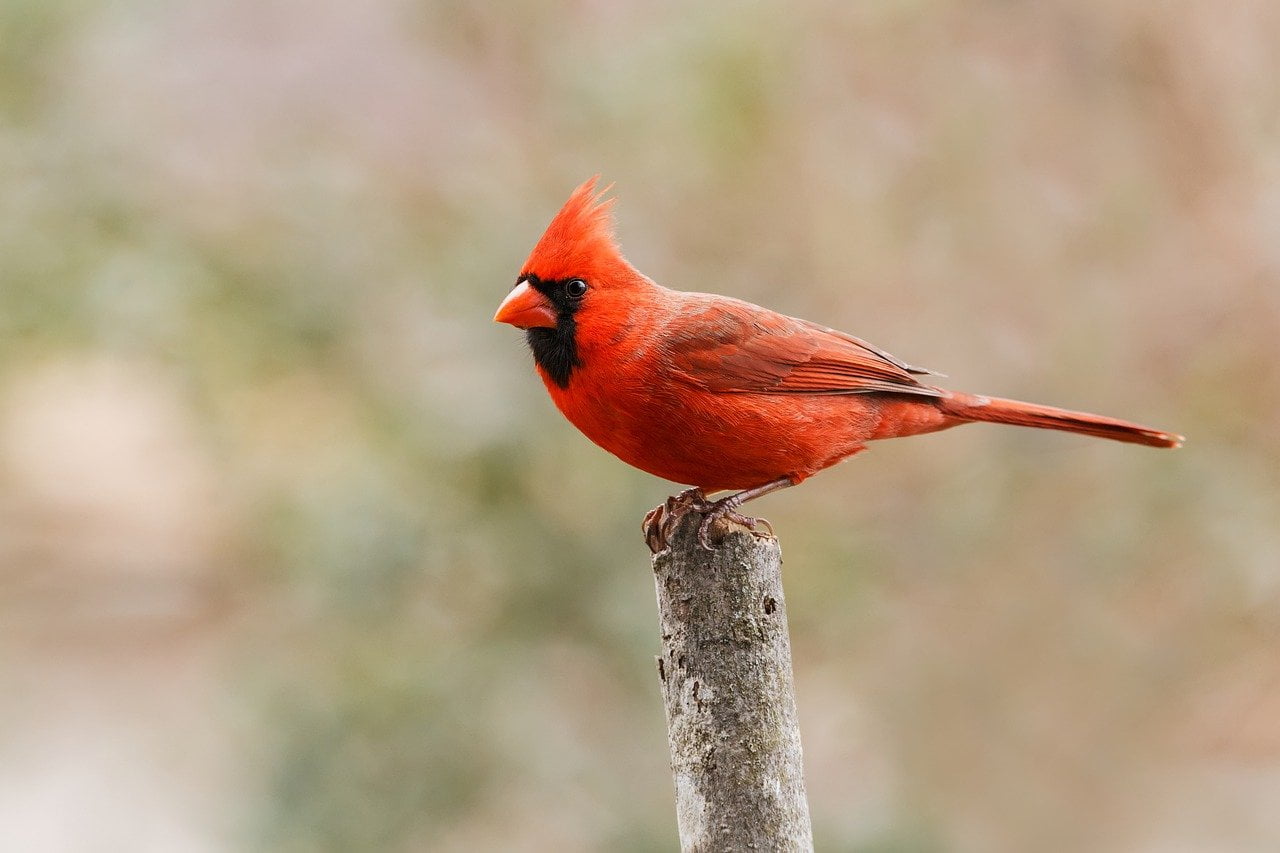 The northern cardinal is a bird in the Cardinalis genus, also known as the redbird. It’s mostly found southeastern Canada, the eastern US, Mexico, Belize, and Guatemala. And it is also an introduced species in some places like Bermuda and Hawaii. It is a medium-sized songbird with a body length of 21 to 23 cm. Northern cardinals eat mainly weed seeds, grains and fruits. And also eat snails and insects including beetles, cicadas and grasshoppers. Also, they are one of the most beautiful bird in the world.

The lilac-breasted roller is an African bird of the roller Coraciidae family, mainly found in sub-Saharan Africa and the southern Arabian Peninsula. Additionally, it’s mostly found in pairs. And mainly eats insects, lizards, scorpions, snails, small birds and rodents. Its nest is in a natural hole in the tree where it can lay its eggs for breeding. The lilac-breasted rollers are one of the most beautiful & colourful birds in the world due to its amazing natural colors. 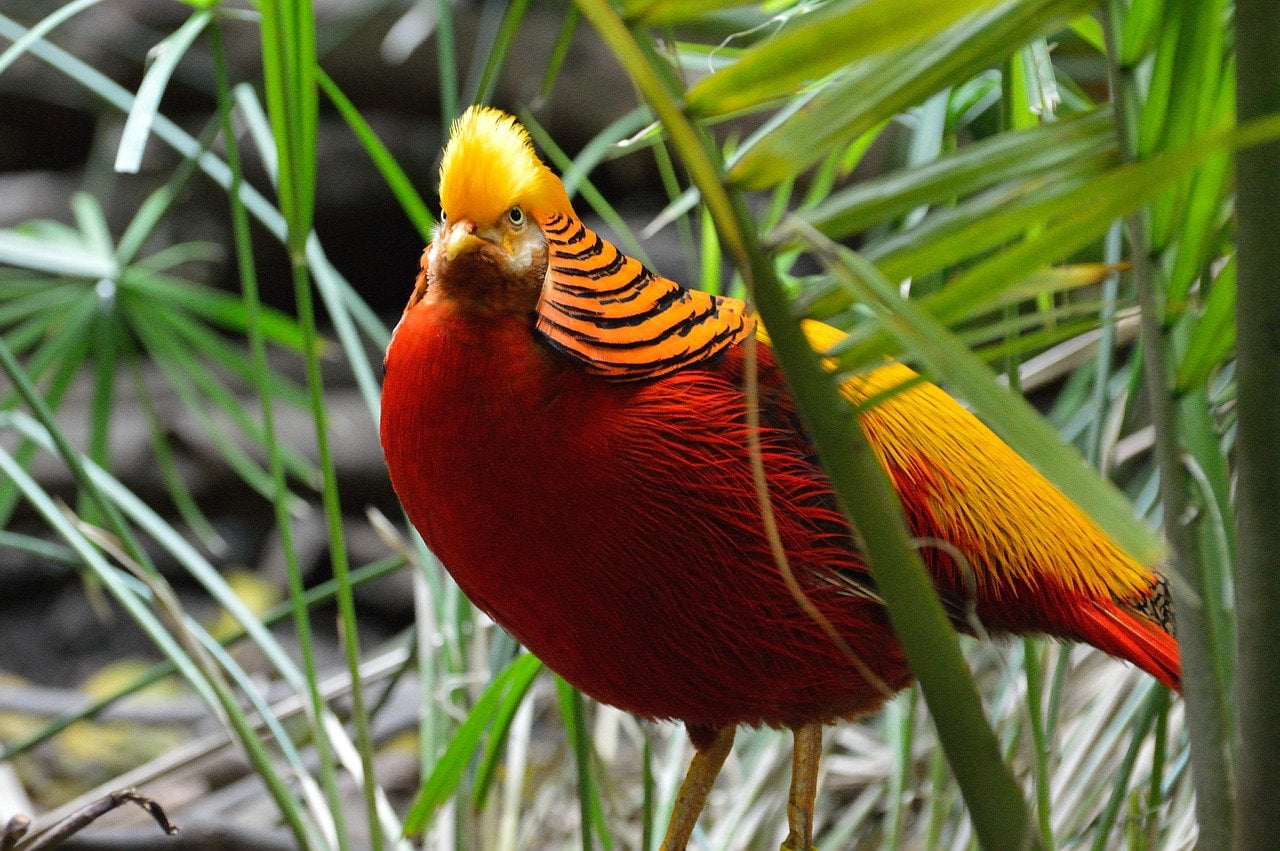 The golden pheasant (Chinese pheasant) is native to the forests of the mountainous regions of western China. But it is also found in many other countries including the United Kingdom, Canada, the United States, Mexico, Colombia, Peru, Bolivia, Chile, Argentina, Uruguay, the Falkland Islands, Germany, Belgium, the Netherlands, France, Ireland, Australia and New Zealand. In these, the length of adults is about 90 to 105 cm. Golden pheasants mainly eat berries, grubs, seeds and other types of vegetation. The golden pheasant is one of the top 10 most beautiful and most beautiful & colourful birds in the world due to its amazing colors.

The Lady Gouldian Finch (Rainbow Finch) is one of the most colorful passerine birds that is native to Australia. It is brightly colored with green, yellow and red markings, females are less brightly colored. Also, a major difference between the sexes is that the male’s chest is purple in color, while the female’s chest is pale pink. Generally, Gouldian finches are about 125 to 140 mm long. The Gouldian finches are seed-eating birds. They mainly eat ripe and half ripe grass seeds of jowar. They eat up to 35 percent of their body weight every day. Gouldian finches are one of the top 10 most colourful & beautiful birds in the world due to its amazing colors. 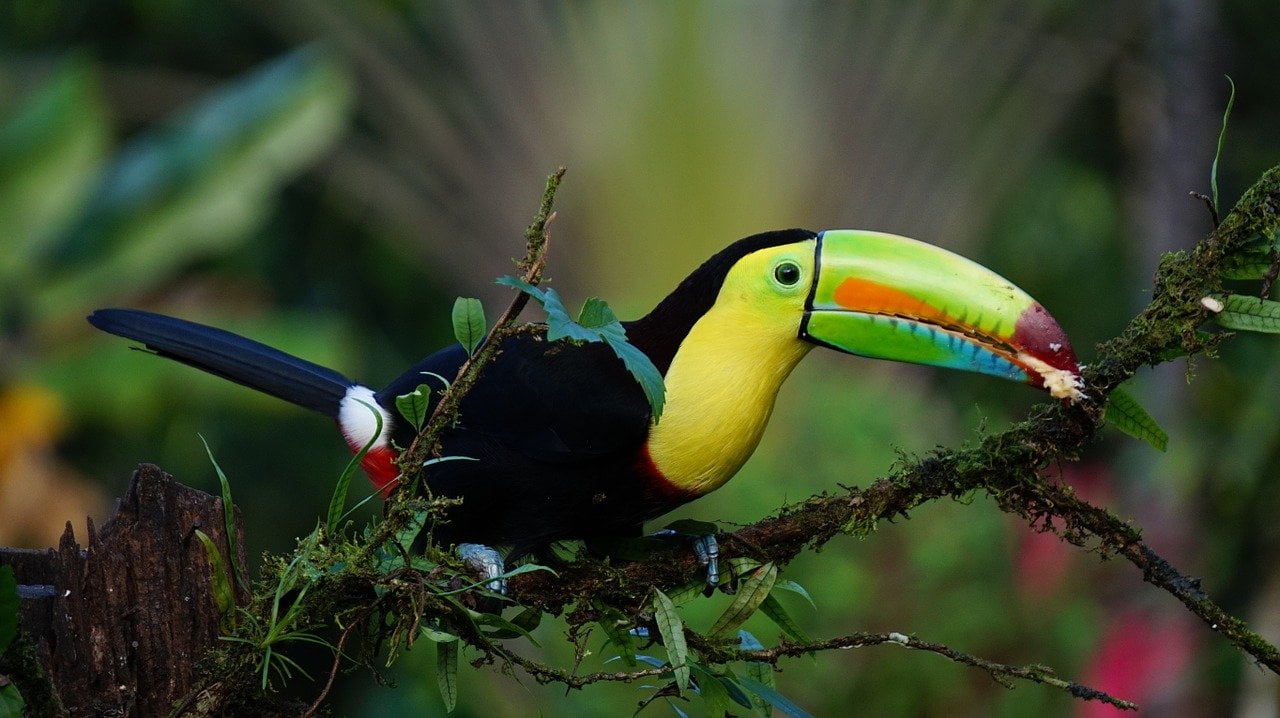 The keel-billed toucan is a colorful Latin American member of the toucan family. It is the national bird of Belize. In addition, this species is commonly found in tropical forests from southern Mexico to Colombia. It is an omnivorous forest bird that mainly eats fruits, seeds, insects, invertebrates, lizards, snakes and small birds and their eggs. Additionally, the length of the keel-billed toucan including its bill ranges from about 42 to 55 cm, and it is one of the top 10 most beautiful birds in the world.

The rainbow lorikeet is a species of parrot native to Australia, common along the eastern seaboard from northern Queensland to South Australia. Its habitat consists of rainforest, coastal scrub and woodland areas. The Rainbow Lorikeet is a medium-sized colored parrot. Its length including the tail ranges from 25 to 30 cm.  And the weight varies between 75 to 157 grams. In addition, juveniles have a black beak, which gradually turns orange.

Rainbow lorikeets feed mainly on fruit, pollen and nectar. They also consume fruits of ficus, trema, apples, muntingia as well as papayas and mangoes that have already been dug up by bats. They also eat maize and jowar crops. Rainbow lorikeet is the third most beautiful & colourful bird in the world due to its amazing colors. 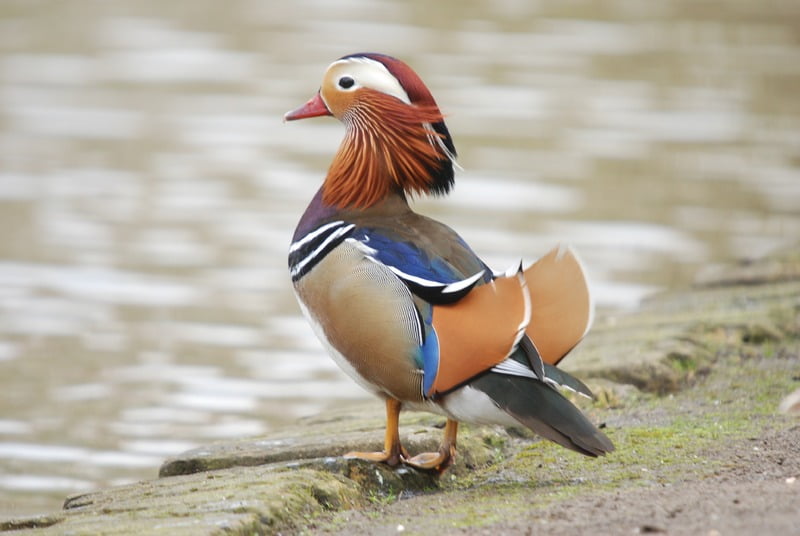 The mandarin duck is a perching duck species, And it’s native to the East Palearctic. It is one of the most colorful duck species of medium size. Mandarin ducks feed on trees in the evening or on the ground during the day. They eat mainly plants and seeds, and also include snails, insects and small fish in their diet. The diet of Mandarin ducks changes seasonally. Both males and females have crests, but the purple crest is more pronounced on the male. Mandarin duck is the second most beautiful bird in the world.

The scarlet macaw is a large red, yellow, and blue colored Central and South American parrot that is a member of a larger group of Neotropical parrots called the macaw. It is native to the humid evergreen forests of tropical Central and South America. In some areas it has faced local extinction due to its capture for the parrot trade, but in other areas, it is quite common. Scarlet macaw is the national bird of Honduras. Due to its amazing colors, this parrot is a popular bird in bird farming.

Scarlet macaws mainly eat nuts, seeds, leaves and fruits. They also sometimes eat insects. Their large and flexible beaks allow them to eat even unripe fruits and hard nuts, which are not possible for most other birds to eat. The Scarlet Macaw the most colourful and beautiful bird in the world.