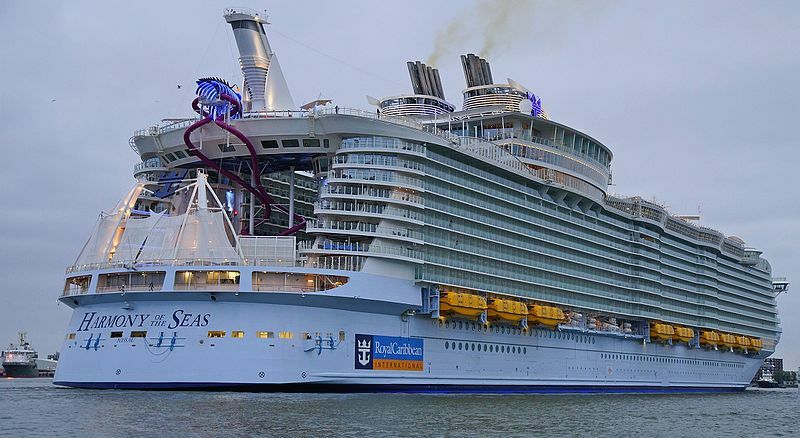 Most of the large ships are used for cargo carrying and naval. The five largest cruise ships in the world are owned and operated by Royal Caribbean International. These ships feature decks, restaurants, pools and cabins, zip-lines, ice-skating rink, surf simulator, aquatic amphitheater for guest use. Would like to know what are the top 10 Biggest Ships in the world in 2023. Check out our list below! This list includes cruise ships as well as oil tankers.

With 181,808 GT tons, Mardi Gras is tenth among the top 10 biggest cruise ships in the world 2023. It is an excellence-in-class cruise ship operated by Carnival Cruise Line. The ship is the lead vessel of Carnival’s fleet of the Excel-class, a subclass of the Excellence class, and was built by Finnish shipbuilder Meyer Turku in Turku, Finland.

Additionally, the ship is often incorrectly referred to as Carnival Mardi Gras, although Carnival has specified that its name does not include the “Carnival” prefix. The “Carnival” in their name was omitted upon their debut for the first time since the Fantasy-class ships.

Mardi Gras measures 181,808 GT and has a maximum passenger capacity of 6,500 passengers, with approximately 2,000 crew members. On its top deck is the “Ultimate Playground” zone, where the world’s first shipboard roller coaster called “Bolt” is located. The ride, designed by Maurer AG, consists of self-propelled cars that ride on an 800-foot track and can travel up to 40 mph.

AIDAnova is a cruise ship built by Meyer Werft GmbH in Papenburg, Germany, under contract with Carnival Corporation for AIDA Cruises. With 183,858 GT tonnage, it is ninth among the top 10 largest ships in the world. The first of the new Excellence-class ships, she was launched on 21 August 2018 and delivered on 12 December 2018.

This ship is the world’s first cruise ship that can operate entirely using liquefied natural gas (LNG), like the cruiseferry Viking Grace. The AIDAnova has four dual-fuel hybrid engines, which can use either LNG or conventional fuel oil.

In addition, a minor fire broke out during its construction at the shipyard, which delayed her sea trials. Her maiden voyage was scheduled from Hamburg on 2 December 2018. Later, in November 2018, a second postponement was announced. Her sea trials were scheduled to begin on 16 November 2018 and all work was to be completed by 30 November 2018.

The Costa Smeralda is a top-class cruise ship. It is currently operated by Costa Cruises, a subsidiary of Carnival Corporation and plc. At 185,010 gross tonnage (GT), she is the largest ship ever commissioned and operated for Costa. By 2023, it is the seventh largest cruise ship in the world and the eighth largest. To be powered entirely by liquefied natural gas (LNG), Costa became the first in 2018 after sister brand, AIDA Cruises, to operate a vessel that runs on LNG, making Costa the second cruise line.

CSCL Globe is a container ship owned and operated by COSCO Shipping. With a 187,541 tonnage, it is seventh among the top 10 largest ships in the world in 2023. CSCL was the world’s largest container ship at the time of its launch in November 2014, with a maximum capacity of 19,100 twenty foot containers.

MS Iona is sixth among the top 10 biggest ships in the world with a total tonnage of 184,089 GT. It is an excellence-in-class cruise ship in service for P&O Cruises, a subsidiary of Carnival Corporation and plc. Also, the ship is the largest ever built for P&O Cruises and to operate exclusively for the British market. She is the first of two similar ships to be built by Meyer Werft for P&O Cruises, with the other, Arriva, due to enter service in 2022.

Additionally, Iona has 17 different eateries, including eight restaurants designated as ‘select food’ and 12 different bars. Plus, it has 16 whirlpools and 4 swimming pools, one of which is located beneath the Skydome. Also, an entertainment venue topped with a retractable stage for shows with a 105-ton, 340-pane, 970-square-meter glass dome. It is the largest after Royal Caribbean’s five largest ships.

In addition, the Allure of the Seas was fitted with an 80 kW solar array by BAM Energy Group, prior to the commencement of service from Port Everglades. The cost of the system is US$600,000 and covers an area of ​​21,530 square feet. It uses uni-solar BIPV laminates designed to withstand foot traffic and marine conditions.

Additionally, Oasis of the Seas had a gross tonnage of 225,282 GT at launch, but this was increased to 226,838 GT in 2019 when additional cabins were added to Deck 14. Also, the ship has 18 lifeboats for a total of 6,660 people carrying 370 people each. Flammable life rafts provide for additional passengers and crew.

In addition, Oasis of the Seas has a zip-line, an ice-skating rink, a surf simulator, an aquatic amphitheater, a miniature golf course, several bars and lounges, a karaoke, comedy club, five swimming pools, volleyball and basketball courts, youth area and nursery for children. Also, many of the ship’s interiors were extensively decorated by muralist Clarissa Parish.

Moreover, Harmony of the Seas has 2,747 staterooms of various sizes that can accommodate 5,479 guests. The ship, like its Oasis-class sisters, is divided into seven neighborhoods, including Central Park and the Boardwalk. In addition, Harmony of the Seas has several water-based attractions, including a large dry slide complex known as The Ultimate Abyss, two surf simulators, three water slides, and 3 swimming pools. Also, it has the first water slide on a Royal Caribbean ship. It has a total of 20 dining venues, a 1,400-seat theater and 11,252 artworks.

02. Symphony of the Seas