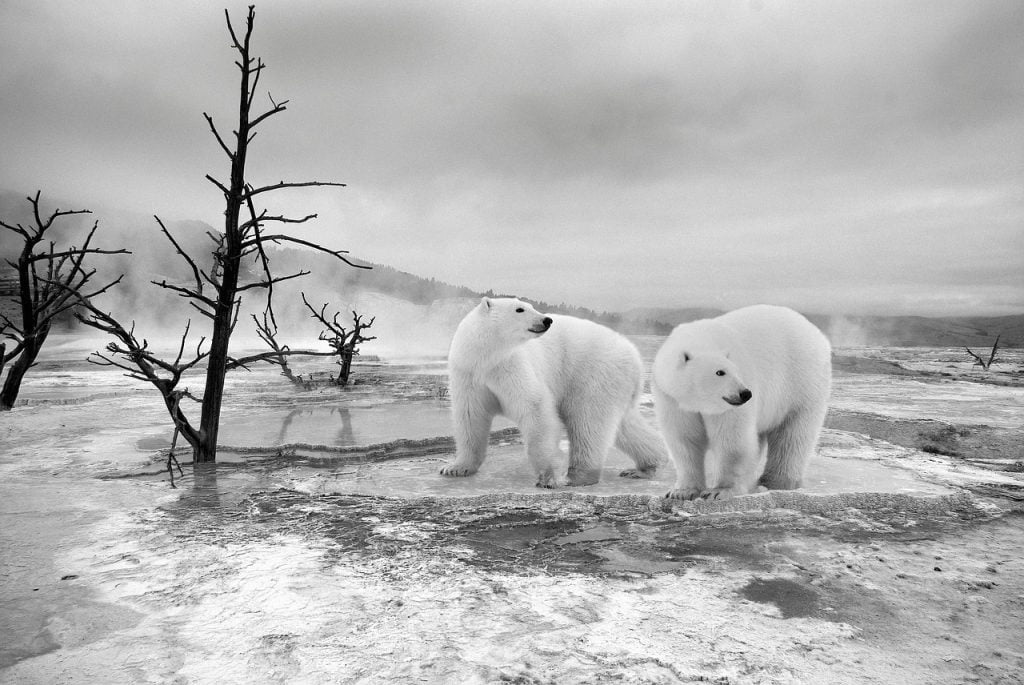 Largest Deserts in the World

The Great Basin Desert is part of the Great Basin between the Sierra Nevada and the Wasatch Range. It is one of the top 10 largest deserts in the world covering an area of ​​190,000 sq mi. The desert is a geographic region that overlaps the Great Basin Shrub Steppe, as defined by the World Wildlife Fund, and the U.S.

The Central Basin and Range ecoregion as defined by the Environmental Protection Agency and the United States Geological Survey. It is a temperate desert with hot, dry summers and snowy winters. The desert spans a large part of the state of Nevada, and extends into western Utah, eastern California, and Idaho. In addition to the Mojave, Sonoran and Chihuahuan deserts, the desert is one of four biologically defined deserts in North America.

The Syrian Desert is one of the top 10 largest deserts in the world, covering 500,000 square kilometers (193,051 sq mi) of the Middle East. It includes parts of southeastern Syria, northeastern Jordan, northern Saudi Arabia and western Iraq. It accounts for 85% of Jordan’s land area and 55% of Syria’s. In the south it borders and merges into the Arabian Desert. The land is an open, stony or gravelly desert footpath, sometimes cut by wadis.

In addition, the Hamad Plateau, a 700–900 m high (2,300–3,000 ft) region in the middle of the Syrian Desert, is a rather flat, rocky semi-desert. It has a limestone rock covered with chert gravel. The little rain that falls on the plateau flows into the local salt flats. The highest peaks of the plateau are the 1,000-metres Khawar um Wul in Saudi Arabia and the 960 metre high Jebel Aniza on the border between Jordan, Iraq and Saudi Arabia.

Along with other deserts of the Arabian Peninsula, the Hamad Desert has been described as one of the driest deserts in the world.

In addition, the central part of the steppe is dominated by shrub and herbaceous plant species, although in the west, where rainfall is high, shrubs are replaced by grasses. Topographically, the desert consists of an alternating tableland and massifs dissected by river valleys and canyons. Also, the more western parts of the steppe host lakes of glacial origin and grade into cold temperate forests with barren mountains or valleys. 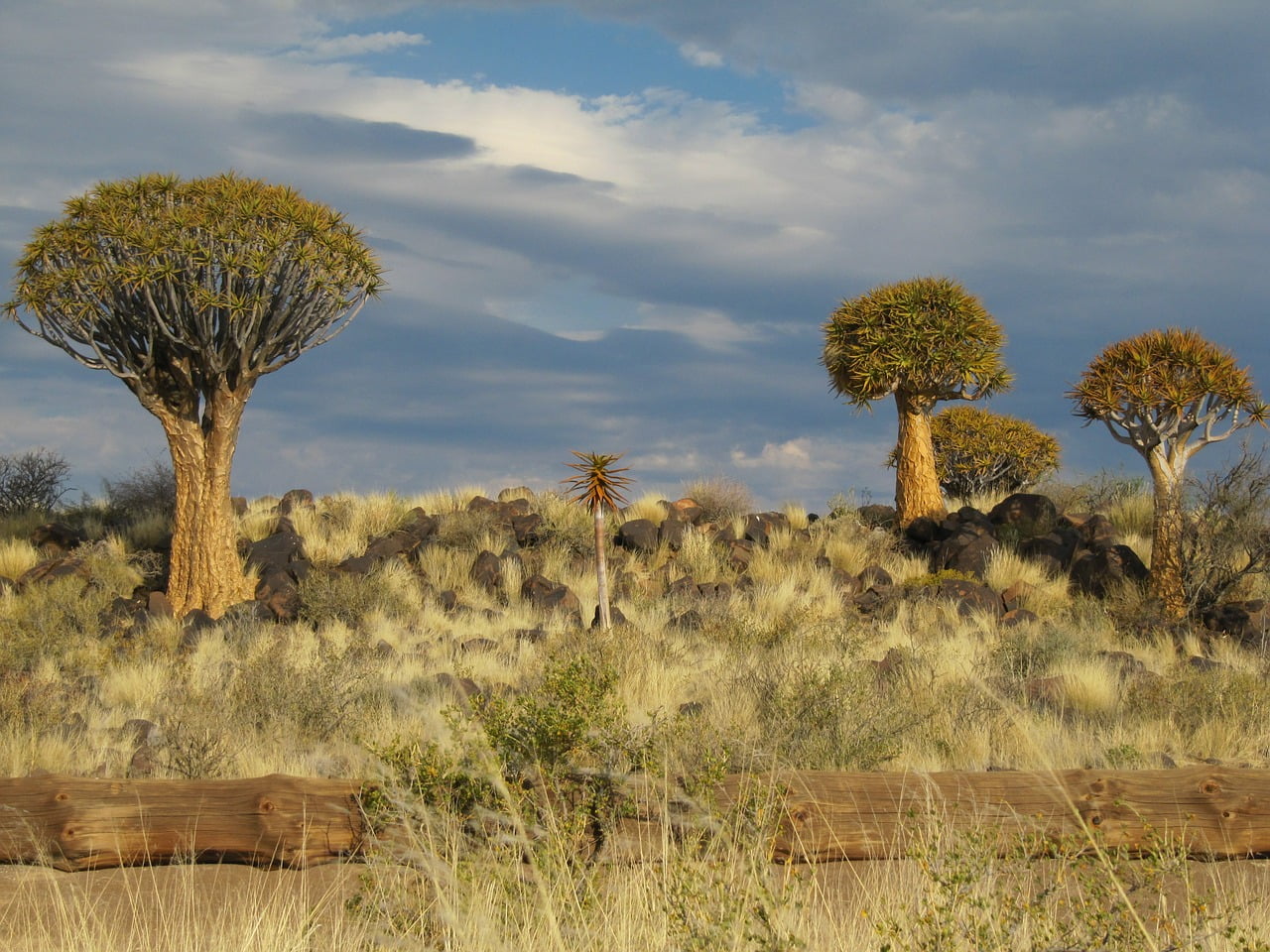 The Kalahari Desert is a large semi-arid sandy savanna in southern Africa. It covers 347,492 square miles, which includes parts of Botswana and Namibia and South Africa. Kalahari Desert is one of the top 10 largest deserts in the world.

The Kalahari Desert is home to many migratory birds and animals. Previously a haven for wild animals ranging from elephants to giraffes, and for predators such as lions and cheetahs, the banks of the river are now mostly grazing sites, although leopards and cheetahs can still be found. Also, the area is now heavily grazing and cattle fencing restricts the movement of wildlife. In addition, among the deserts of the Southern Hemisphere, the Kalahari is most similar to some Australian deserts in its latitude and the mode of its formation. 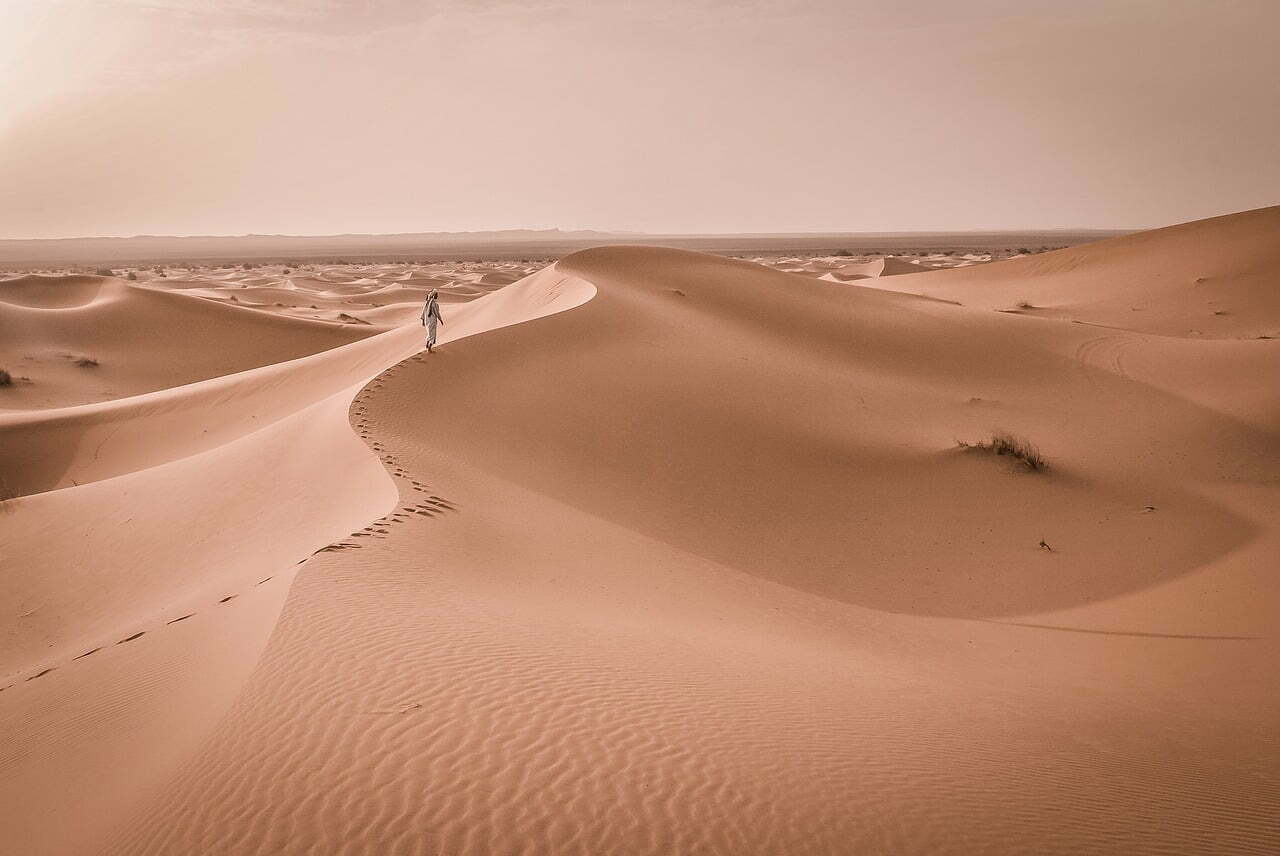 The Gobi Desert is a large desert in East Asia. With an area of ​​500,002 sq mi, it is one of the top 10 largest deserts in the world. It includes parts of northern and northeastern China and southern Mongolia. Also, the desert valleys of the Gobi are bounded by the Altai Mountains and the grasslands and steppes of Mongolia to the north, the Taklamakan Desert to the west, the Hexi Corridor and the Tibetan Plateau to the southwest, and the North China Plain to the southeast. Gobi is notable in history as the location of several important cities along the Silk Road.

In addition, the Gobi is a rain shadow desert, which blocks the rainfall reaching the Gobi region from the Indian Ocean formed by the Tibetan Plateau. It is the sixth largest desert in the world and the second largest desert in Asia after the Arabian Desert.

The 7 Largest Continent In The World by Area

Furthermore, biodiversity is very low in the desert region of Arabia, although some endemic plants grow here. Many species, such as the striped hyena, jackal and honey badger, have become extinct due to hunting, human encroachment and habitat destruction. Other species have been successfully reintroduced, such as the Arabian sand gazelle, and are protected in many reserves. Overgrazing by animals, off-road driving, and destruction of human habitat are the main threats to this desert region.

By international standards, Australian deserts receive relatively high rates of rainfall. No meteorological station located in the arid region records less than 100 mm of mean annual rainfall. The deserts of Australia, especially in the interior regions, lack any significant summer rain. Deserts are not necessarily completely devoid of vegetation, but contain large areas where vegetation is very limited in height or extent. The Australian Desert is one of the top 10 largest deserts in the world. 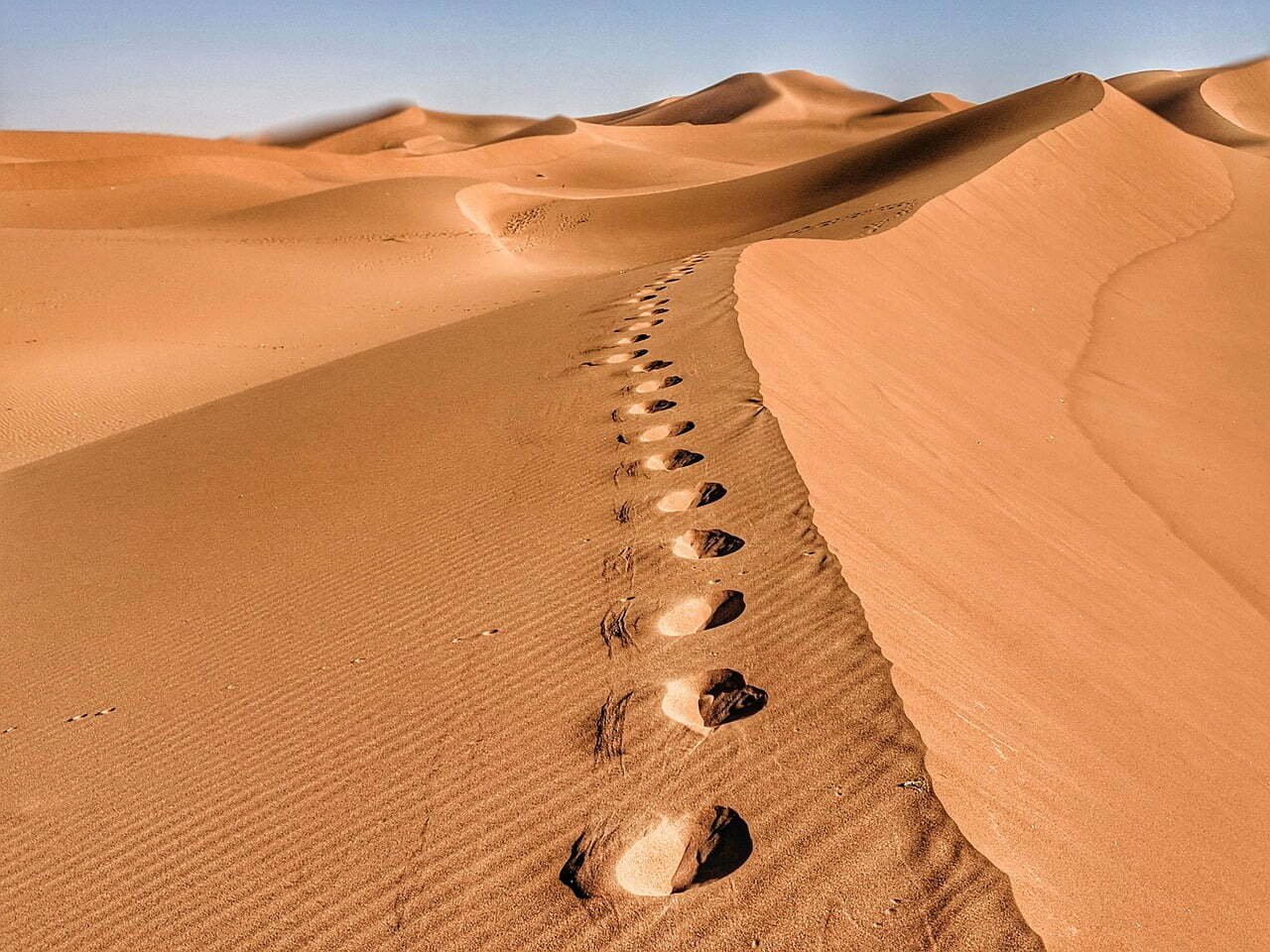 Furthermore, the Sahara Desert covers large parts of Algeria, Chad, Egypt, Libya, Mali, Mauritania, Morocco, Niger, Western Sahara, Sudan and Tunisia. Also, it covers 9 million square kilometers, which is 31% of Africa. If all regions with an average annual rainfall of less than 250 mm are included, the Sahara would be 11 million square kilometers. Also, it is one of three distinct geographical provinces of the African Great Geographical Division.

In addition, the Sahara is predominantly rocky hamada (stone plateau). Ergs make up only a small part, but several sand dunes are over 180 meters (590 ft) high.

The Arctic Desert ecoregion is a terrestrial ecoregion. It covers the island groups of Svalbard, Franz Josef Land, Severny Island and Severnaya Zemlya in the Arctic Ocean above 75 degrees north latitude. The region is covered with glaciers, ice and bare rock in a harsh cold climate.

Additionally, in summer temperatures rise above freezing for short periods, so some of the ice melts, and the region supports colonies of marine birds and mammals. The Arctic is the second largest desert in the world after the Antarctic Desert. It covers an area of ​​13,900,000 km2 and is spread over Alaska, Canada, Finland, Greenland, Iceland, Jan Mayen, Norway, Russia, Svalbard, and Sweden. 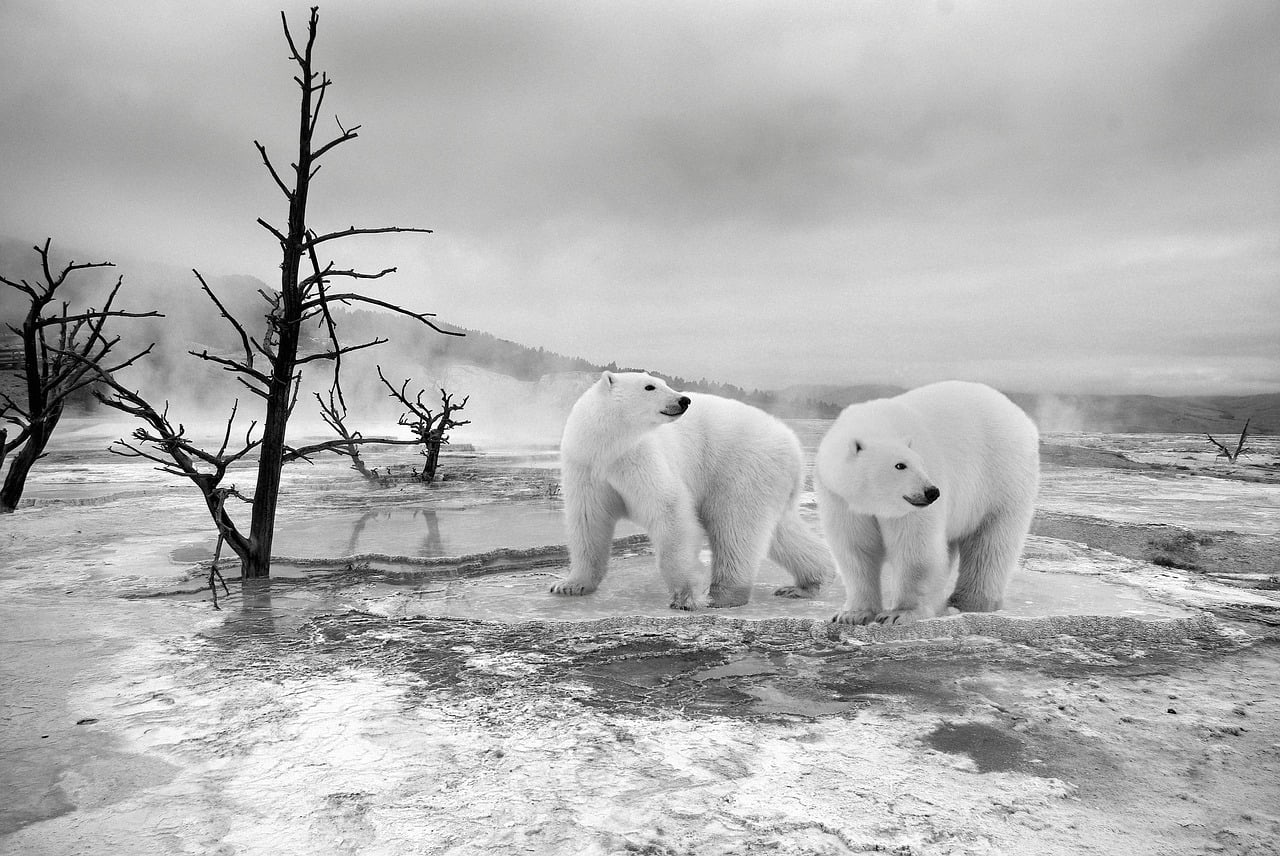 At 14,200,000 square kilometers (5,482,651 sq mi), Antarctica is the fifth largest continent in the world; almost twice the size of Australia. It is the southernmost continent on Earth. It includes the geographic South Pole and is located in the Antarctic region of the Southern Hemisphere. Almost entirely south of the Antarctic Circle, and surrounded by the Southern Ocean.

Moreover, much of Antarctica is a polar desert, with an annual rainfall of 200 mm (8 in) along the coast and much less inland. Yet 80 percent of the world’s freshwater reserves are stored there, enough to raise global sea levels by nearly 200 feet if it all melts.