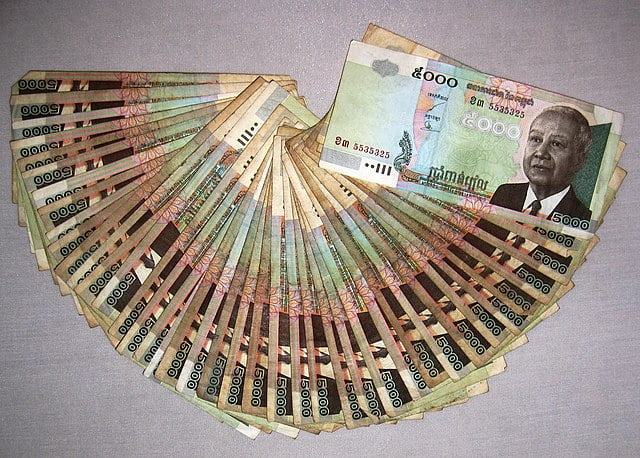 What are the Lowest Currencies in the World?

The riel is the official currency of Cambodia. The Cambodian Riel is the tenth lowest currency in the world by 2022. There are two different reels, the first was released between 1953 and May 1975. There was no monetary system in the country between 1975 and 1980. A second currency, also known as the “riel”, has been issued since 20 March 1980.

Popular belief states that the name of the currency comes from the reel, a fish of the Mekong River. It is more likely that the name derives from the high silver content Spanish-American dollar valued at eight reals, a coin widely used for international trade in Asia and the Americas from the 16th to the 19th centuries.

The Guarani is the national currency unit of Paraguay. It is one of the top 10 weakest currency in the world in 2022. Guarani was subdivided into 100 centimos, but due to inflation, centimos are no longer in use.

A new ₲5,000 note has been issued.  ₲5,000 was put into circulation on 14 January 2013.  This note is printed by the Canadian Bank Note Company.  Such safety features include see-through window in the shape of locomotive, watermark of portrait. Although the note will still have a portrait of Don Carlos Antonio López, the reverse will also have the same design of the López Palace. ₲10,000 as well as ₲20,000 notes are produced by Polish Security Printing Works.

Currently, the smallest denomination in circulation is the 500 franc note due to low purchasing power. As of 23 October 2018, 1 Euro is equal to 10,417.46 Guinean Francs, which means that the highest valued banknote, of 20,000 Francs, has a value of less than 2 Euros.

The soʻm (Sum) is the official currency of Uzbekistan in Central Asia. In the Soviet Union, speakers of Kazakh, Kyrgyz and Uzbek called the ruble som, and the name appeared on the back of banknotes, among texts on the value of bills in all 15 official languages ​​of the Union. The word som means “pure” in Kyrgyz, Uyghur and Uzbek as well as several other Turkic languages. The word means “pure gold”.

In addition, the Governor of the Bank of Laos announced on January 25, 2012 that the Bank of Laos would issue 100,000 kip banknotes as a regular issue on February 1, 2012, to enable Lao people to enter the U.S. To encourage the use of the national currency instead of the dollar and the Thai baht. The Kip ranks sixth among the top 10 lowest calculating currencies in the world in 2022.

Top 10 Most Populated Countries In The World 2022

The leone is the official currency of Sierra Leone. It is one of the top 10 lowest currencies in the world in 2022. It is subdivided into 100 cents, but the denominations in cents are no longer in use due to the low value of the currency. The ISO 4217 code is ssl and is abbreviated to leon because li is placed before the sum.

In addition, Leone was introduced on 4 August 1964. It replaced the British West African pound at the rate of 1 pound = 2 leone.

The Rupiah is the official currency of Indonesia. Issued and controlled by Bank Indonesia, its ISO 4217 currency code is IDR. The Indonesian rupiah is the fourth weakest circulating currency in the world as of April 2022, with one United States Dollar equaling Rp 14,387.

The name “Rupaya” is derived from the Sanskrit words silver, rupayakam. Sometimes, Indonesians also informally use the term “perak” to refer to the rupiah in coins. The rupiah is subdivided into 100 sen, although high inflation has made all coins and banknotes denominations in sen obsolete.

The dong has been the official currency of Vietnam since 3 May 1978. It is the third weakest currency in the world in 2022. It is issued by the State Bank of Vietnam. The dong was also the currency of the predecessor states of North Vietnam and South Vietnam, which replaced the previously used French Indochinese piastre.

The Vietnamese dong is increasingly moving towards using banknotes exclusively – As of 2012 the use of the coins has greatly decreased, and since 2014 the coins are not generally accepted at retail, but will still be accepted at some banks.

The Vietnamese dong is currently the third weakest circulating currency as of April 2022, with one United States dollar being equal to 23,010 dong.

The Rial is the official currency of Iran. The Iranian Rial is currently the second weakest circulating currency in the world as of April 2022, with one United States Dollar being equal to 42,025 Iranian Rial.

There is no official symbol for the currency but the Iranian standard ISIRI 820 defines a symbol for use on typewriters and the two Iranian standards ISIRI 2900 and ISIRI 3342 define the character code used for it. The Unicode Standard has a compatibility character defined U+FDFC ﷼ RIAL SIGN (HTML &#65020;).

The proposal to leave four zeros has been agreed upon by the Iranian parliament. By replacing the rial with a new currency, called the toman, the name of a previous Iranian currency, at the rate of one toman = 10,000 riyals. This change is expected to happen between 2020 and 2022.

The bolivar is currently the lowest circulating currency in the world by 2022. In this, 1 United States Dollar has been converted into approximately 443,195 bolivars as of April 2022.

The Bolivar Soberano has been the official currency of Venezuela since 20 August 2018. Bolivar Soberano replaced Bolivar Fuerte after a transition period. The primary reason for the replacement was hyperinflation, at a rate of 1 Bs.S to 100,000 Bs.F.