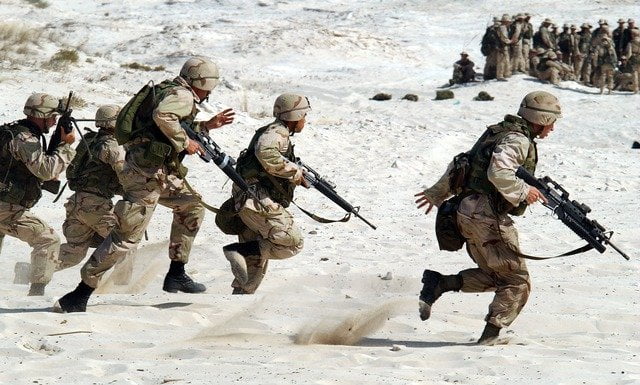 Who is the largest military force in the world? The country’s military plays an important role in the development of the nation. It facilitates the implementation of government policies and protects the citizens from any external or internal threat. The Army has divisions like – Army, Navy, Air Force and in some countries there are branches like Marine and Coast Guard. Want to know who has the largest army in the world? Here we have listed the Top 10 Largest Armies in the world 2021.

Also, the King of Saudi Arabia is the Commander-in-Chief of the Armed Forces and formulates military policy with the Ministry of Defense and the Ministry of the Interior.

However, Vietnam does not have a separate ground force or army branch. All the ground forces, army corps, military districts and special weapons belong to the Ministry of Defense. Directly under the Central Military Commission, the Minister of Defense and the General Staff of the Vietnam People’s Army.

Additionally, the military flag of the PAVN is the flag of the Socialist Republic of Vietnam, with the word Quyết thắng added to yellow on the top left. Also, the People’s Army of Vietnam is the ninth largest military force in the world 2021. The Islamic Republic of Iran Armed Forces is a joint military force of Iran. This includes the Army (Artesh), the Islamic Revolutionary Guard Corps and the Law Enforcement Force.

The Iranian Armed Forces are the largest in the Middle East in terms of active troops. The Islamic Republic of Iran Armed Forces is the eight among the top 10 largest armies in the world 2021.

In addition, Iran’s military force is made up of approximately 610,000 active-duty personnel and 350,000 reserve and trained personnel. Also, those can be mobilized when needed, bringing the country’s military strength to about 960,000 total personnel. These numbers do not include the Law Enforcement Force or the Basij. South Korea has the tenth largest budget in the world. Also, the ROK Armed Forces is ranked as the sixth most powerful army in 2020, and 2021. The Republic of Korea Armed Forces ranks 7th among the top 10 largest armies in the world in 2021. The Pakistan Armed Forces are joint military forces of Pakistan. It ranks 6th among the top 10 largest armies in the world in terms of active military personnel and consist of three formally uniformed services in the Army, Navy, and Air Force. Which are supported by various constitutionally sanctioned paramilitary forces.

An important component of the armed forces structure is the Strategic Planning Division Force. It is responsible for the maintenance and security of Pakistan’s strategic and tactical nuclear weapons reserves and assets.

In addition, the chain of command of the Pakistan Armed Forces is organized under the Chairman of the Joint Chief of Staff Committee with the Chiefs of the Army, Navy and Air Force. Also, all branches are coordinated systematically during joint operations and missions under the Joint Branch Headquarters.

The 10 Largest Countries In The World In Area

Top 10 Most Populous Countries In The World 2021 In addition, the Russian Armed Forces is one of the largest military forces in the world. As of 2021, the military consisted of approximately one million active duty personnel, ranks fifth among the top 10 largest armies in the world 2021.

Additionally, there are more than 2.5 million reservoirs, with a total number of possibly up to 20 million. It is mandatory for all male citizens between the ages of 18-30 to be drafted for one year of service in the Armed Forces. The Russian Armed Forces are the second most powerful military in the world. The Korean People’s Army is the military force of North Korea and the armed wing of the Workers’ Party of Korea. Under the Songun policy, it is the central institution of North Korean society. Kim Jong-un serves as Supreme Commander and Chairman of the Central Military Commission. The KPA consists of five branches – Ground Force, Naval Force, Air and Anti-Air Force, Strategic Rocket Forces, and Special Operation Force.

In addition, the KPA considers its primary rivals the Armed Forces of Korea and the Republic of Korea of ​​the United States as a Korean demilitarized zone. With 5,889,000 paramilitary personnel as of 2016, it is the largest military organization in the world. This numbers 25% of the North Korean population. The Korean People’s Army is the fourth largest military force in the world 2021. In addition, the President of the United States is the Commander-in-Chief of the Armed Forces. Also, it forms military policy with the federal executive departments of both the Department of Defense (DoD) and the Department of Homeland Security (DHS), the main components of which.

Moreover, military policy is carried out. All six armed services are among the eight uniformed services of the United States. The US Armed Forces are the third among the top 10 largest military force in the world 2021. And it is the most powerful army in the world. The Indian Armed Forces are the military forces of the Republic of India. It consists of three professional uniformed services – Indian Army, Indian Navy and Indian Air Force.

In addition, the Indian Armed Forces are under the management of the Ministry of Defense (MoD), Government of India. Also, with a strength of over 1.4 million active personnel, it is the second largest military force in the world 2021 and the largest volunteer army in the world. The People’s Liberation Army (PLA) is the regular armed force of the People’s Republic of China and the armed branch of the Chinese Communist Party, the founding and ruling political party of the PRC.

Additionally, apart from the Central Military Commission and several smaller units under it, the PLA has five major service branches – the Ground Force, Navy, Air Force, Rocket Force and Strategic Support Force. The majority of military units across the country are assigned by geographical location to one of the five theater commands.

In addition, the PLA is the world’s largest military power and the second largest defense budget in the world. Also, it is one of the fastest modernizing militants in the world, and has been touted as a potential military superpower with significant regional defense and growing global power launch capabilities. The PLA is the third most powerful army in the world.